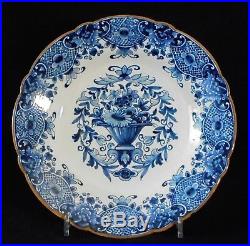 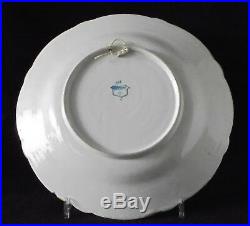 A large, decorative Dutch delftware. Charger - plate - dish. With the possibility to hang on the wall. Handpainted, beautiful underglaze blue on creamy white, made by. In Friesland, the Netherlands, Holland.

With a floral border design and in the center a bouquet in a vase. Marked in blue underglaze with the Makkum Tichelaar mark and 966. Condition: firm, clean & clear glaze, slight craclkes to the glaze, no restoration, several small chips at the rim (some are pointed out on the 3rd picture).

Age: it is impossible for us to date this plate, but certainly after 1895. Diameter: 35 cm / circa 13.7 inch. Please see our other items for more Makkum Tichelaar, Delftware and Porceleyne Fles / Royal Delft items.

For more info on Tichelaar Makkum see more below. This will be according to the PostNL conditions and destinations. The shippingcosts differ per country, and therefore. PostNL weigthcategory of this item: 0-2kg. Combined shippingcosts by weightcategory: 0-2 / 2-5 / 5-10 kg.

Tichelaar is a Dutch pottery. Royal Tichelaar Makkum / Koninklijke Tichelaar. Was established in 1572 in Makkum, a village situated on the banks of the IJsselmeer / Lake IJssel, a lake since 1932, but before it was sea: the Zuiderzee / Southern Sea, in the northern Dutch province Friesland of The Netherlands.

And later pottery and tiles. The company has focused on traditional decorative pottery since 1890.

As the company in Makkum has always made ceramics, Tichelaar Makkum is regarded as one of the oldest companies in the Netherlands. In 1960, the company received the designation Koninklijk (Royal), on the occasion of its 300th anniversary.

Later research showed that the company had been active even earlier and it celebrated its 400th anniversary in 1994, on the basis of the results of historical research. In 2007, documentation was discovered showing that the company was already active in 1572, as a Spanish. Map of that date shows bricaría Spanish for brickworks. In 1689, Freerk Jans a brickmaker, so called tichelaar, bought one half of the works, and then in 1694, the other half. During the eighteenth and nineteenth century, it was mainly dishes for daily use and tiles. That were made in the clay ovens. Around 1865, the demand for dishes decreased. The brothers Jelmer and Jan started a drastic innovation process, whereby the company could continue as a factory for decorative pottery.

Throughout the ages, the company has retained the old working methods, working with locally dug clay that is covered in a white tin. Glaze after the first firing, called the Majolica technique. In 1882, the use of plaster moulds was introduced, increasing the assortment of decorative pottery. The raw material is yellow or red firing sea clay. That is abundant in the west of the province of Friesland.

Clay but also dug his own clay from the neighbouring countryside, leading to the local word'afgeticheld' to describe a meadow that had been dug up. The clay was mixed with marl. In the pottery washing plant and then stored in a cellar to keep it frost-free.

Shortly before processing, the clay was thoroughly kneaded and mixed again and then cut to size or punched. After drying, it was baked to biscuit, called raw material, which was then covered in white on the front. On the back, the dishes got a layer of [lead] glaze. After the artists had applied their decoration to the lead glaze, they were fired a second time.

Two sorts of glaze were used; one transparent and one usually white covering glaze, called lead glaze and white glaze respectively, which were both prepared in the company. For the decoration, coloured glazes were prepared in the company. They were ground to a fine powder and when mixed with water, they could be used for painting. There were five colours (blue, purple, green, yellow and orange), though in practice it was usually blue and purple that were used. The item "Vintage Tichelaar Makkum Holland charger, delft blue white plate dish 35cm 13.7" is in sale since Saturday, August 25, 2018.

This item is in the category "Pottery & Glass\Pottery & China\Art Pottery\European Pottery\Dutch". The seller is "delta98denhaag" and is located in 's-Gravenhage. This item can be shipped worldwide.