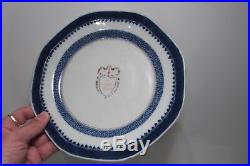 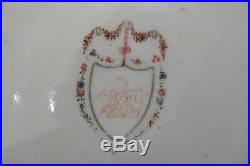 SUPERB PAIR CHINESE EXPORT ARMORIAL MONOGRAM PLATES. POSSIBLY MADE FOR EAST INDIA COMPANY SEA CAPTAIN WILLIAM GAMAGE. (descended from John Gamage, Mass, USA). (His father was John Gamage of Cambridge, Mass, USA). Around the time of the plate 1788,1790. He married Jane Stewart in Calcutta 1781. WJG could be for William and Jane. In his will he swapped places for a voyage with Captain John Lennox. For the sum of 1000 pounds.

This item is in the category "Antiques\Asian/Oriental Antiques\Chinese\Porcelain". The seller is "kingschina" and is located in Snape, Nr Aldeburgh. This item can be shipped to North, South, or Latin America, all countries in Europe, all countries in continental Asia, Australia.