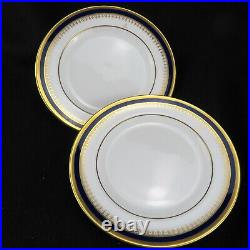 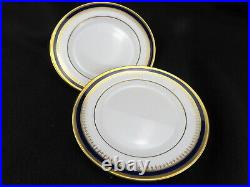 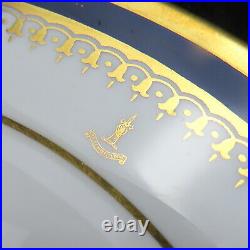 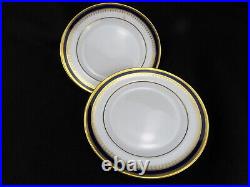 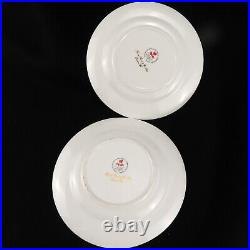 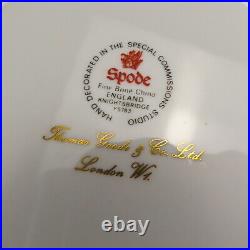 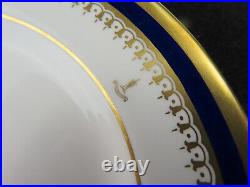 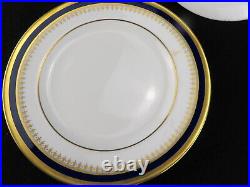 Listing is for a pair of plates, additional pieces are available. Shaw Clan Crest: A dexter arm holding a dagger. Shaw Clan Motto: Fide Et Fortitudine (By fidelity and fortitude). History of Clan Shaw (Schaw). The Lowland surname is of a territorial origin and first appears in the 13th century.

The southern families of the name are usually found around Kirkcudbrightshire, Ayrshire and Stirlingshire. Simon del Schawe, Fergus del Schawe and William de Shawe, all of the County of Lanark, rendered homage to Edward I of England in 1296. The northern Clan, however, descends through Shaw, son of Gilchrist, grandson of Angus, 6th Chief of Clan Mackintosh. The Shaws were granted lands in Rothiemurchus in 1236, and, in the following century, fought for Robert the Bruce at the Battle of Bannockburn in 1314. Macghillechrist Mhac Iain, 2nd Chief of Shaw, was elected Captain of Clan Chattan in 1391 and had almost certainly previously fought against Clan Cameron at the Battle of Invernahavon in 1370.

Aedh, his grandson, made his home at Tordarroch in 1468, his followers becoming known as Clan Aedh. The Shaws lost Rothiemurchus in the 15th century and moved over the hills to the village of Farr in Strathnairn. From that time Tordarroch became the Clan Seat, although in 1790 the mortgage was redeemed under Scots Law leaving the Chief homeless. In 1609, Shaw of Tordarroch signed the Clan Chattan Charter on behalf of Clan Aedh and his kinsmen of Rothiemurchus. The Shaws of Tordarroch supported the Marquis of Montrose and the Royalist Cause.

Clan Chattan rose up to fight during the Jacobite Uprising of 1715, with Robert, Younger of Tordarroch, and his brother Angus leading the Shaws. Both were afterwards captured and imprisoned. Robert died, and Angus was sent to the Carolinas until his pardon in 1722. Because of this, he did not participate in the 1745 Uprising, although a number of Clansmen did rally to support Prince Charles Edward Stuart.

In the aftermath, however, many of them scattered to Ireland or emigrated to America. Alexander, 15th Chief, fought at the Battle of Quebec in 1775 and was appointed Lieutenant Governor of the Isle of Man in 1790. His wife, Charlotte Stewart, through her maternal grandmother, a Mackenzie of Coul, inherited the property of Newhall through entail, and this became the Chief's home thereafter.

The estate of Tordarroch was recovered for the Clan in 1946, and, in 1970, Major Iain Shaw of Tordarroch was recognised by the Lord Lyon King of Arms as 21st Chief of Clan Shaw. He was created Baron Craigmyle in 1929. Surname distribution in Scotland: The Shaw name is most commonly found in Perth and Kinross (Perthshire and Kinross-shire), the Outer Hebrides (the most populated islands includes Lewis and Harris, North Uist, South Uist, Benbecula and Barra), Renfrewshire, Argyll and Bute, Lanarkshire and Dumfries and Galloway.

Places of Interest: Dunlichty Parish Church, Daviot, Inverness-shire. Ruined church where Shaw Chiefs are buried. This was a Burgh of Barony held by the Shaws until 1741. Ancestral lands held by the Shaws.

Seath Mor Sgor Fhaichlach, a Shaw Chief who lived in the 14th century is buried here. He stood over six feet tall and struck terror into even his own followers. He is said to haunt the woods here. Associated family names (Septs): MacKay, MacHay, Seath, Seth, Sheach, Shiach. This item is in the category "Pottery, Ceramics & Glass\Decorative Cookware & Tableware\Plates".

london" and is located in this country: GB. This item can be shipped worldwide.