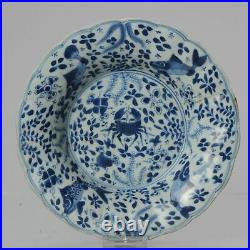 3500 "Make us an offer" Listings/. Antique Kangxi Period Blue and white Sea Life plate FIRE OF ROTTERDAM. A very nicely made plate with classical crabs. According to the history of the family who owned it was burned after the fires that occurred during the German bombardment of Rotterdam in WW2. The German bombing of Rotterdam in World War II , also known as the Rotterdam Blitz , was the aerial bombardment of Rotterdam by the Luftwaffe on 14 May 1940, during the German invasion of the Netherlands in World War II.

The objective was to support the German troops fighting in the city, break Dutch resistance and force the Dutch army to surrender. Almost the entire historic city centre was destroyed, nearly 900 people were killed and 85,000 more were left homeless.

The psychological and physical success of the raid, from the German perspective, led the Oberkommando der Luftwaffe (OKL) to threaten to destroy the city of Utrecht if the Dutch command did not surrender. The Dutch surrendered in the late afternoon of 14 May, signing the capitulation early the next morning. Restored (was in 3 pieces). 18th century Qing (1661 - 1912). We can not control this. For China (& rest of Asia) & US allow at least 2 to 3 weeks. Depending on the situation it can take up to 1.5 month. This also influences the tracking data shown online. You can follow it at. The item "Antique Kangxi Period Blue and white Sea Life plate FIRE OF ROTTERDAM" is in sale since Tuesday, April 20, 2021. This item is in the category "Antiques\Asian Antiques\China\Plates".

The seller is "theceramics_and_collectibles" and is located in Amsterdam. This item can be shipped worldwide.