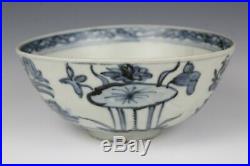 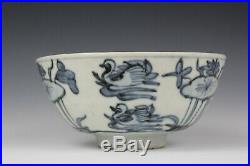 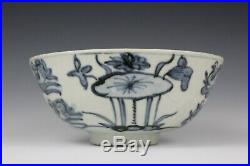 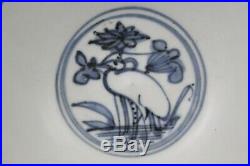 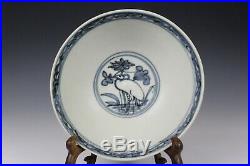 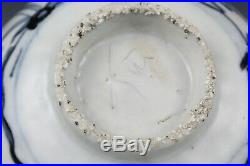 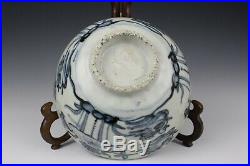 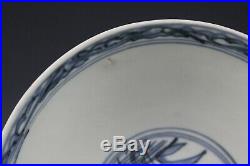 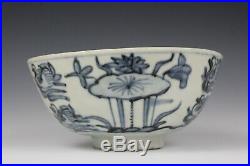 Great piece; In good condition. A very nice and rare bowl with central scene of a bird in a landscape. I think this is from the Binh Thuan shipwreck. It seems to be a shipwreck bowl based on the condition of the glaze and looks like bowls recovered from the wreck and auctioned at Christie's in 2004.

Overall Condition Very Good with Firing crackle and some glaze shrinkage only. 20cm diameter and 9cm high approx. 16th century 17th century Ming (1368 - 1620). At least one kiln producing wares of this rough kind have now been discovered in Zhangzhou prefecture in Fujian province why the name Zhangzhou ware is now preferred by many Chinese scholars.

Photo courtesy of: Ron Leidelmeyer. A large family of export ceramics of the 16th and 17th century was called Swatow ware in the West and are still referred to by this name. Swatow wares are characterized by sand adhering to the bottom of individual pieces and are usually associated with over-glaze enamel decoration using a distinctive palette dominated by iron red, turquoise and black. However, it may also be decorated in underglaze blue or in slip.

The name is derived from Shantou , a coastal town in southeastern Guangdong province. The ware seems to have been widely made in the Jiangxi, Fujian, Yunnan, and Guangdong provinces. At least one kiln producing this "Swatow" ware have now been discovered in Zhangzhou prefecture in Fujian province why the name Zhangzhou ware is now preferred by many Chinese scholars. A large and diversified family of provincial ceramics that were made in southern China in the sixteenth and seventeenth centuries is loosely identified as "Swatow" ware, although the precise place or places of origin are not known. This rather crude "Swatow" pottery often has a distinctive slanting footand large amounts of coarse sand adhering to the base and foot.

"Swatow" wares have been decorated in a number of ways. Some, are painted in underglaze blue; others have incised designs under whitish, blue, or celadon glazes.

In one variety, painted slip designs have been used against pale grayish blue, light celadon, or brown grounds. Sometimes "Swatow" wares have been freely and vigorously painted in a combination of underglaze blue and overglaze enamels, or in various combinations of overglaze red, green, turquoise, black, and sepia enamels. Examples of Swatow wares are in the British Museum, Valenstein, Susan, Dish No. The item "Antique Chinese Ming Swatow Zhangzhou Blue and White Porcelain Bowl Bird Ca 1600" is in sale since Friday, March 22, 2019. This item is in the category "Antiques\Asian Antiques\China\Plates".