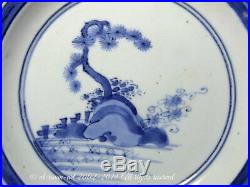 A Very Fine Early Blue And White Porcelain Dish With A. , Edo, Kanbun, early 1660s finely potted non-biscuit fired white porcelain of circular form with an everted rim with a cobalt-blue border with four pine needles in much darker cobalt-blue, the interior painted in fine underglaze cobalt-blue tones with a central double circular medallion depicting a riverscape, a pine tree and flowering sprays issuing by the rockwork, two crafts in the near distance, the plain underside, a large cobalt-blue. Seal character mark within a circle to the base set with a spar mark, some kiln-grit adhering to the footring, covered with a pale blue-tinged glaze in darker hues where thick.

The early blue and white Arita serving dish is thought to have been manufactured in the early Kanbun period for the domestic market. Some various versions of the so-called. A very similarly potted blue and white porcelain with a cobalt-blue rim border and an identical. Mark is illustrated in by.

141, albeit a different interior design. 18.1 cm (7.12 in) maximum cross diameter. Good condition with no chips, cracks and restoration.

Some manufacturing imperfections to the glaze with some unglazed areas. One side of the liprim is slightly warped (accidental kiln flaw). Some minor old wear to the glaze in general use. Are antiques and works of art with some age, which are unconditionally guaranteed to be genuine as described. The dimensions of each lot stated in the descriptive information are approximate.

Due to lighting and shooting conditions, some colour variation and brightness in digital images may vary depending on your computer monitor settings and performance of monitors. Extra images on each lot will be provided upon request. Bank processing times vary from bank to bank and country to country.

Offered by postal-administration members of the Universal Postal Union. We cannot be held liable for these charges under any circumstances, as they are beyond our control. All necessary permits in exporting goods from Japan are undertaken for purchasers.

The item "A Fine Early Blue & White Arita (Ai-Kutani) Porcelain Dish. Edo, early 1660s" is in sale since Sunday, August 18, 2019. This item is in the category "Antiques\Asian Antiques\Japan\Plates". The seller is "at-asian-art" and is located in Saitama.