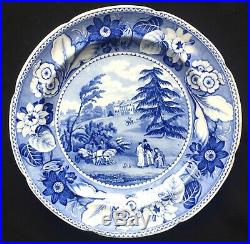 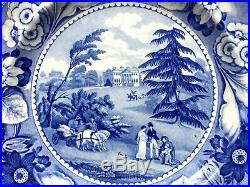 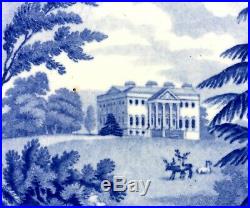 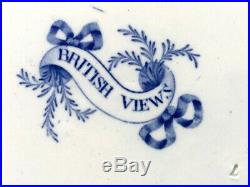 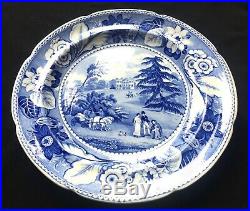 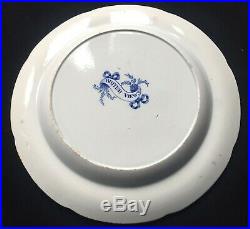 The first house on the Claremont estate was built in 1708 by Sir John Vanbrugh. Leopold received British citizenship in 1815. On 2 May 1816, Leopold married Princess Charlotte of Wales at Carlton House in London.

Charlotte was the only legitimate child of the Prince Regent George (later King George IV) and therefore second in line to the British throne. On 5 November 1817, after having suffered a miscarriage, Princess Charlotte gave birth to a stillborn son.

She herself died the next day following complications. Leopold was said to have been heartbroken by her death. Alternate Names: "British Views" I. Category: British Themes / Places. Border: Floral and Botanical / Alternating Flowers / British Views: Maker Unknown I.

TCC: Additional Information: Plate 9.75 inches. This pattern is illustrated on a 10 inch plate in CoyshHenrywood1982, p. 61, and in Henrywood2016, p. Claremont House was built by Capability Brown, John Sloane and Henry Holland for Clive of India, to replace an earlier house by Vanburgh. Sadly, Clive committed suicide before its completion in 1779.

These two may well be the standing couple illustrated on the plate before whom a woman is kneeling with her arm round a child. Note also the carriage drawn by four ponies and groom holding a horse.

The Transferware Recorder 3 U. This transfer printed pottery view of Claremont House, Surrey on this plate is from the British Views Series is thought to depict Prince Leopold and Princess Charlotte in the foreground. This transferware plate is from the late Regency part of the Georgian period c. The maker of this Series of transferware is unknown, presumably Staffordshire. Claremont House was built on the site of a much earlier house by Henry Holland in partnership with Capability Brown who laid out the gardens. It was given by the Prince Regent to Princess Charlotte and Prince Leopold of Saxe Colberg, Germany. Princess Charlotte Augusta was the only child of George Prince of Wales. Sadly, the princess died in 1817. The plate is 9.7 inches (24.6cm) in diameter. Condition: The plate is in very good condition with no damage and no restoration. There is some very small roughness on the edge of the rim from soot kiln debris in the glazing or making. On the face you can see a very tiny soot mark to left of the estate house, in photo. It displays beautifull, see photos. We feel the little bits of Staffordshire soot adds to the early charm! Please contact me if I can be of any other help. The item "1815 Princess Charlotte-Claremont Surrey-Blue White Transferware Pearlware Plate" is in sale since Friday, September 4, 2020. This item is in the category "Collectables\Historical Memorabilia\Royalty Collectables". The seller is "ancestorville" and is located in Totnes, Devon.

This item can be shipped to United Kingdom.